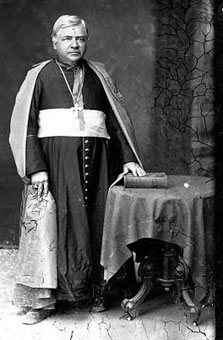 Salpointe was born in Saint-Maurice de Pionsat, Puy-de-Dôme, (Auvergne). He received his preparatory education in a school in Agen and studied the classics at the College of Clermont (now Clermont-Ferrand after the fusion of the cities of Clermont and Montferrand). He subsequently studied philosophy and theology in the Theological Seminary of Montferrand. Salpointe was ordained a priest on December 20, 1851, and in 1859 he volunteered to come to the New Mexico territory as a missionary.

In 1860, Salpointe was assigned to the parish in Mora, New Mexico, where he served for six years. The expanse of that parish extended for over 200 miles from north to south. Among his accomplishments at Mora was his success in persuading the Sisters of Loretto and the De La Salle Christian Brothers to come to the parish and establish schools there.

In August 1864, Bishop Jean-Baptiste Lamy of Santa Fe was informed that the Jesuits in Arizona had been recalled by their Superior and that the Arizona territory was left without priests to care for the spiritual wants of its people. Salpointe was appointed Vicar General of the Arizona Missions.

On February 7, 1866 Salpointe arrived in Tucson, Arizona along with two priests from Santa Fe. At the time Arizona consisted of approximately 6,000 settlers in some half a dozen settlements and several mining camps, as well as the Native Americans that inhabited the territory. Salpointe set about building churches, organizing new congregations, and founding schools and hospitals in the territory. According to historian David Leighton, of the Arizona Daily Star newspaper, Salpointe helped complete the San Agustin Church in Tucson. This was the first cathedral church built in what was then called the Arizona Territory, now the State of Arizona. In 1868 Arizona was given the status of a Vicariate Apostolic by the Church and Salpointe was appointed its first bishop.

On February 19, 1885, Bishop Salpointe was appointed coadjutor to Archbishop Lamy of Santa Fe, but remained as administrator of the Vicarate of Arizona until the appointment of his successor, Bishop Peter Bourgade, in early 1885. Salpointe then succeeded Lamy as Archbishop of Santa Fe on July 18, 1885.

Archbishop Salpointe retired on January 7, 1894, and moved to Tucson, where he wrote a history of the Catholic Church in the Southwestern United States. Salpointe died on July 15, 1898, and is buried under the altar of St. Augustine Cathedral in Tucson. Salpointe Catholic High School in that city is named in his honor. Provided by Wikipedia
Showing 1 - 1 of 1 for search: 'Salpointe, John Baptist, 1825-1898', query time: 0.03s
Search Tools: Get RSS Feed — Email this Search —