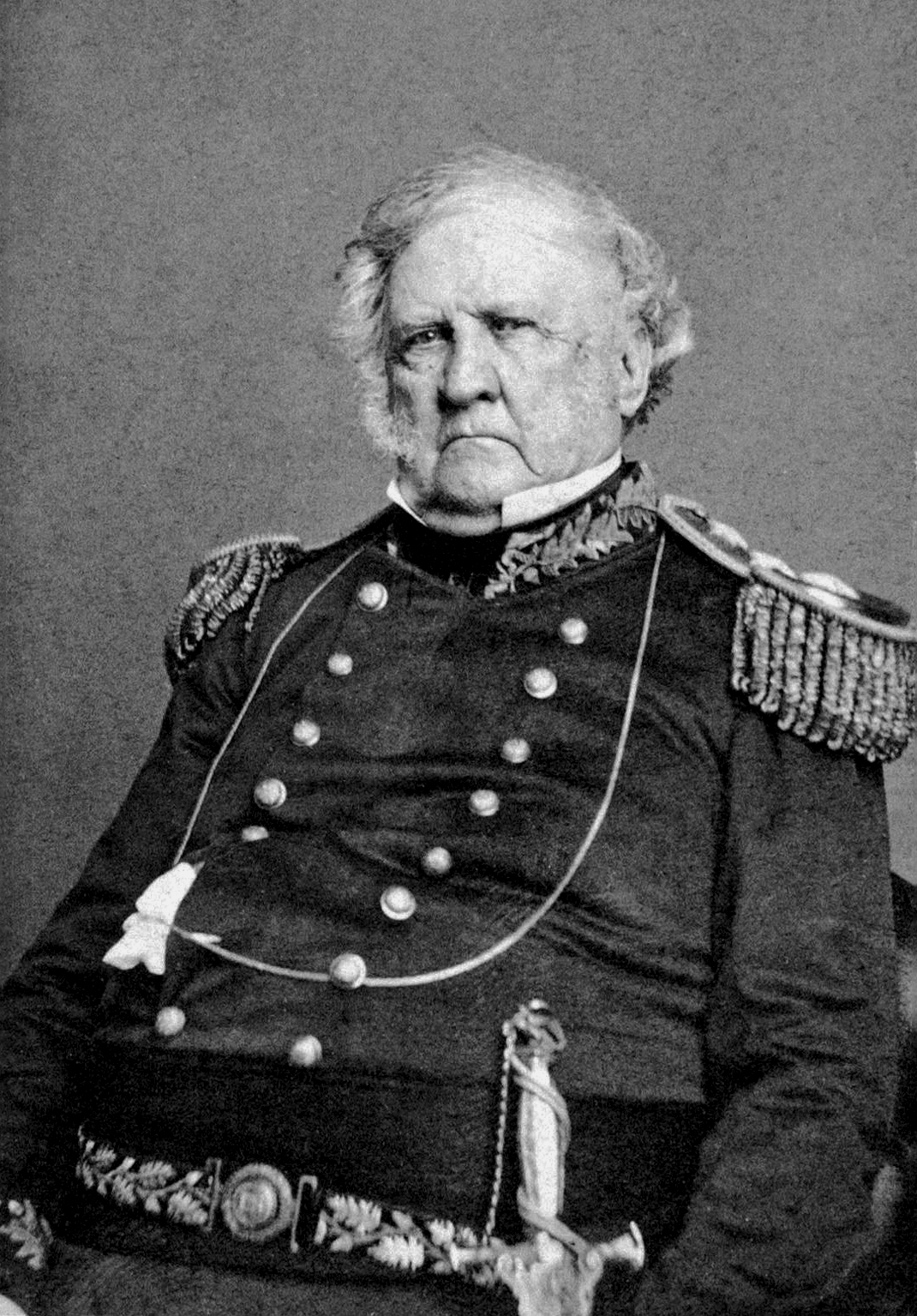 Winfield Scott (June 13, 1786 – May 29, 1866) was an American military commander and political candidate. He served as a general in the United States Army from 1814 to 1861, taking part in the War of 1812, the Mexican–American War, the early stages of the American Civil War, and various conflicts with Native Americans. Scott was the Whig Party's presidential nominee in the 1852 presidential election, but was defeated by Democrat Franklin Pierce. He was known as Old Fuss and Feathers for his insistence on proper military etiquette, and as the Grand Old Man of the Army for his many years of service.

Scott was born near Petersburg, Virginia, in 1786. After training as a lawyer and brief militia service, he joined the army in 1808 as a captain of the light artillery. In the War of 1812, Scott served on the Canadian front, taking part in the Battle of Queenston Heights and the Battle of Fort George, and was promoted to brigadier general in early 1814. He served with distinction in the Battle of Chippawa, but was badly wounded in the subsequent Battle of Lundy's Lane. After the conclusion of the war, Scott was assigned to command army forces in a district containing much of the Northeastern United States, and he and his family made their home near New York City. During the 1830s, Scott negotiated an end to the Black Hawk War, took part in the Second Seminole War and the Creek War of 1836, and presided over the removal of the Cherokee. Scott also helped to avert war with Britain, defusing tensions arising from the Patriot War and the Aroostook War.

In 1841, Scott became the Commanding General of the United States Army, beating out his rival Edmund P. Gaines for the position. After the outbreak of the Mexican–American War in 1846, Scott was relegated to an administrative role, but in 1847 he led a campaign against the Mexican capital of Mexico City. After capturing the port city of Veracruz, he defeated Mexican General Antonio López de Santa Anna's armies at the Battles of Cerro Gordo, Contreras, and Churubusco. He then captured Mexico City, after which he maintained order in the Mexican capital and indirectly helped envoy Nicholas Trist negotiate the Treaty of Guadalupe Hidalgo, which brought an end to the war.

Scott was a candidate for the Whig presidential nomination in 1840, 1844, and 1848, and won it in 1852. The Whigs were badly divided over the Compromise of 1850, and Pierce won a decisive victory over his former commander. Nonetheless, Scott remained popular among the public, and in 1855 he received a brevet promotion to the rank of lieutenant general, becoming the first U.S. Army officer to hold that rank since George Washington. Despite being a Virginia native, Scott stayed loyal to the Union and served as an important adviser to President Abraham Lincoln during the opening stages of the Civil War. He developed a strategy known as the Anaconda Plan, but retired in late 1861 after Lincoln increasingly relied on General George B. McClellan for military advice and leadership. In retirement, he lived in West Point, New York, where he died on May 29, 1866. Scott's military talent was highly regarded by contemporaries, and historians generally consider him to be one of the most accomplished generals in U.S. history. Provided by Wikipedia
1

A document for all thinking men : The political letters and writings of General Scott, reviewed, discussed, and compared. His native Americanism proved by his own words! His suppor...
by Scott, Winfield, 1786-1866.
Published 1852
Location: Hesburgh Libraries, University of Notre Dame

Saved in:
Search Tools: Get RSS Feed — Email this Search — Save Search